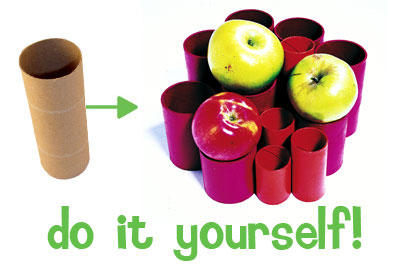 We've had a great month of some fabulous news articles here at our RePlayGround.

Rob Walker from the New York Times wrote a great article called Trash Talk in today's Sunday Times magazine. You can read all about RePlayGround's upcycling adventures and our philosophy of giving garbage another go. Plus super-design website Core77 already picked this and posted about this article.

And be sure to check out the October issue of Everyday with Rachael Ray to see our ReMake It wine cork trivet in the faves section.

We're all about rethinking your garbage and teaching you how to upcycle on your own. It's really not that hard. RePlayGround is here to help show you how you can do-it-yourself!

Good times!
Posted by Unknown at 7:21 AM No comments:

Confessions of a Radical Industrialist

Last week a couple of us Replaygrounders had the privilege of going to see a talk by Ray Anderson, who's on tour promoting his new book.

For those unfamiliar, he is the CEO of Interface, a Georgia carpet tile manufacturer. He's well known in the design community, having been profiled in magazines like Metropolis and received recognition and awards for his efforts over the last several years. "Confessions of a Radical Industrialist" is a followup to his book "Mid-Course Correction: Toward a Sustainable Enterprise: The Interface Model".

Ray's story is fascinating. As he will tell you himself, he worked in his extremely polluting and petroleum-based industry for decades without giving the environment a second thought. It wasn't until 1994, when an employee sent him a copy of Paul Hawken's "Ecology of Commerce", that he had what some describe as an "eco-epiphany" - all of a sudden, he decided that protecting the environment was not just important for our future and the future of the planet, but also made great business sense.

From then on he made it his mission to transform his company and the way it did business - "doing well by doing good" - and become a leader by example. Interface now champions a cause called "Mission Zero" - zero environmental footprint by 2020. Interface is committed to its goal, and this commitment has yielded a number of happy accidents and innovations. We heard quite a few anecdotes about the interesting (and profitable) surprises that came about as Interface began to change the way it did business. It was truly inspiring to hear what Interface has achieved - just by setting out to try something new. (And as long as you're not a competitor in the carpet business, Interface will be happy to share its expertise!)

Mission Zero is ambitious and admirable, and Ray is doing a tireless job of promoting his ideals. I especially appreciate that he's putting a sensible, businesslike face on eco-friendliness: when something makes financial sense, it's a lot easier to win over eco-skeptics!

If you ever get the chance to see him speak, I highly recommend it. In the meantime, add his book to your reading list.

Here at Replayground we love to hear about others' adventures in upcycling. Check out this post over at New American Dream about some inspiring recycling projects - including more recycled homes, and an artist who won a $15,000 grant with work made from found materials.

Posted by abby kelly at 7:22 AM No comments:

Another Rethink - Refuse - Reuse, this time for all you gardeners out there.

But what's eco-friendlier than not buying new stuff in the first place? It's temptingly easy to spend your energy shopping for the "greenest" solution to a problem, but it's even greener to use what you already have. Before you head to the garden center for a big bag of shredded mulch bark, take a look at that stack of old newspapers.

Shredded newspaper is fantastic at keeping moisture in and weeds at bay. It's more realistic for those of us with smaller gardens, and it's not the most decorative option, but it works wonders in vegetable gardens and around newly-established plants that need lots of water and TLC. Newspaper mulch is recommended by many gardeners, including the folks at Organic Gardening. Shredded or torn, it makes a nice airy mulch around plants. Or, if you're trying to eradicate stubborn weeds, put down a few layers of intact newspaper as a barrier.

Most newspapers today are printed with soy ink, but if you're unsure about what your local paper uses, don't hesitate to ask. (And if they're still using petroleum-based inks, encourage them to switch!)
Posted by abby kelly at 2:58 PM 2 comments: 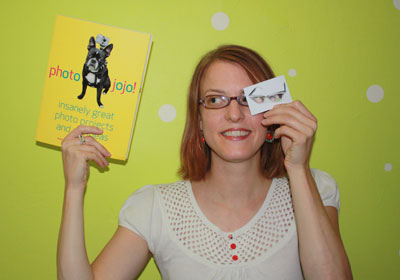 Our friends at PhotoJoJo sent us an advance copy of their sweet new book - PhotoJoJo: insanely great photo projects and DIY ideas. It'll be hitting stores and their website on September 15, or you can order your own advance copy here.

Just as the title implies, the book includes oodles of insanely great photo projects including my own recycled contribution - spectacular eyeglass frames - a new take on this project. Get a copy of the book for yourself and learn how to bake photo cupcakes, turn an old fork into a photo stand, and bunches of other projects that will make you fall in love with photography all over again. What are you waiting for?
Posted by Unknown at 12:09 PM 1 comment: 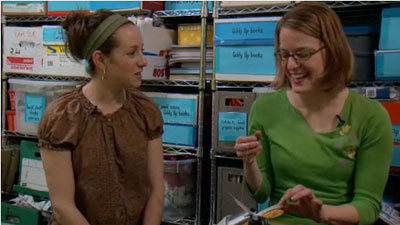 I sat down with my friend Danielle Venokur to share some eco-friendly wedding project ideas. You can view the segment over at Mother Nature Network and whip up a few of these projects for that special day. Reusing materials isn't only green in eco-friendliness, but it can also save you some green in your wallet.

The cereal box butterflies are great for any party and you can download the DIY template here (PDF download). 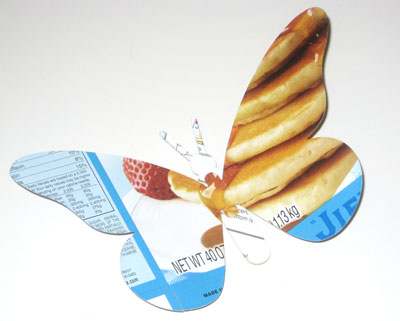 Great read in the New York Times about a man in Texas who builds houses completely from salvaged and reclaimed materials. The slideshow is chock full of inspiring images. I'm especially digging the ceiling made of frame samples and the osage orange wood countertops.

It's always nice to be reminded that serious re-use is possible on a large or small scale -- and ideas abound whether you're looking to reuse a plastic bottle or tons of construction waste! (For you NYC-based folks looking for sources of salvaged materials, check out Build It Green NYC - and if anyone knows of more, feel free to let us know in the comments.)
Posted by abby kelly at 9:14 AM 1 comment: 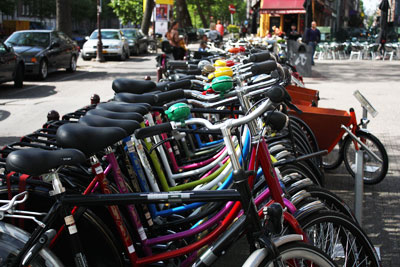 I recently returned from a summer vacation to Europe. One of my stops was Amsterdam and it really opened my eyes to bike riding as a real form of public transportation. Sorry New York, you don't have anything on Amsterdam quite yet. New York has done a great job in this past year putting in bike lanes and bike lights. Amsterdam is what New York can aspire to be like in 10 years. Pretty much every street had a bike lane and all bikers knew what direction to go in. Even the ATMs were bike accessible. 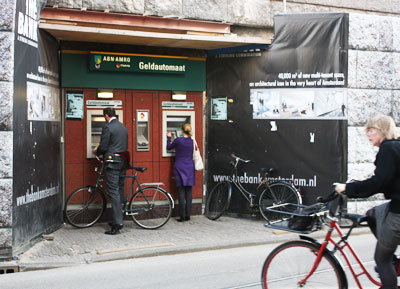 Whaddya think? Start replacing car parking garages with bike garages? You can certainly fit a lot more bikes. With a lot fewer emissions. That image below is an open air bike garage loaded with bikes. Not a car in sight.